This past summer I had the opportunity to work with some of my peers on an mobile app project. I had full liberty to chose whatever technologies I wanted to put in the development stack.

With only 3 months to get a minimum viable product I knew that doing native development with separate iOS and Android codebases wasn’t going to cut it. My interest was turned to alternatives that would allow me to publish apps for both platforms from one unified codebase.

At first I looked towards Apache Cordova as a way to meet our needs, but quickly realized that running a hybrid web app inside of a node.js microservice wasn’t going to give me the full performance control I needed.

I then found that Xamarin was the perfect option, allowing me to put a majority of the backend logic inside of a portable class library and then doing some native UI tweaking at the end. 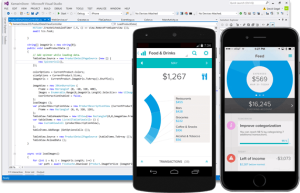 With Xamarin, all of the code you write is done is C# and then trans-compiled into the native Java or Objective-C for each respective platform. It was amazing to see how quickly this allowed us to prototype and test our apps. All of the development was done on a Windows machine with a Mac remote agent that we used to deploy to the iOS simulator over the network.

Without Xamarin, the project would have either had to sacrifice one of the mobile platforms or extend the development timeline. But thanks to this new framework we didn’t have to make any compromises.

If you haven’t heard about Vivaldi then you’ve been missing out on the most awesome thing to happen for web browsers in years.

Vivaldi is so amazing that it’s actually replaced chrome as my default browser across all my systems. I’ve become so used to the powerful features like tab stacks and mouse gestures that I can’t live without them.

A little background on Vivaldi: it was created by the former CEO of Opera and the first stable release v1.0 was put out in April of 2016. I have been using Vivaldi religiously since it previewed in November 2015 and every single update has made the browser better and better.

Vivaldi is built on the rock solid performance of the Chromium project with NodeJS under the hood for some extended functionality. As a consequence, all of your favorite Chrome .crx extensions will work right out of the box. It’s fast, fluid and looks amazing. As you cycle through tabs the entire browser UI color changes based on the current tab’s prominent color (e.g. facebook will highlight blue, youtube red, etc.)

Added bonus: a built-in dark theme that also changes all the interfaces and dialogs along with it.

If you’re interested in something fun and fresh I would highly recommend giving Vivaldi a shot.

To get things going I’ll start by introducing myself. I’m a Computer Science student enrolled at Stevens Institute of technology. Outside of the classroom I’m a passionate web developer driven by the industry’s most cutting edge, under-adopted technologies.

Every now and then I plan on posting small things I find interesting in the world of web development and software design. That’s it for now, I hope you find some of my future content to be both enjoyable and enlightening.